For WDF staff, World Diabetes Day is a global affair

For WDF staff, World Diabetes Day is a global affair

Gwendolyn Carleton
WDF employees spread around the world on World Diabetes Day 2015, raising awareness about the global diabetes epidemic – and working towards solutions. 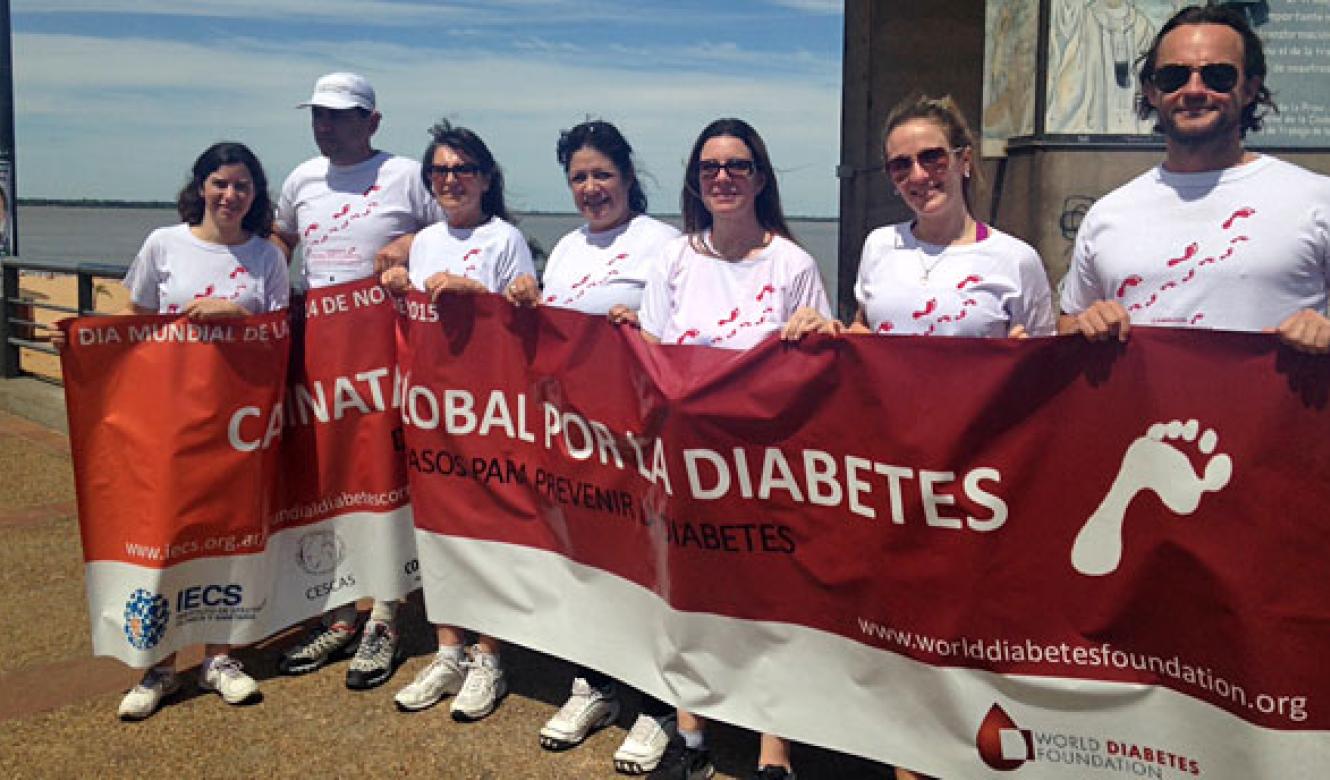 The WDF's Jakob Sloth Yigen Madsen (right) with project partners in Corrientes, Argentina on Nov. 14.
SEE THE SLIDESHOW
For the WDF, World Diabetes Day 2015 began on 7 November, on a stage at the Plaza de la República in Mexico City, Mexico.
WDF Senior Programme Manager Bent Lautrup-Nielsen was there with Mexico City’s health secretary, top city health officials, representatives of the national diabetes federation and others working to counter the impact of diabetes in Mexico, while a crowd of more than 2,000 people looked on.
The health secretary, Dr Armando Ahued, described worrisome new findings about the city’s diabetes prevalence, and said a new WDF partnership project in Itzapalapa, one of the city’s low-income and marginalised boroughs, is among the efforts to lower it. That project, WDF15-1228, is the most recent of many WDF-funded projects in Mexico over the years.
After the speeches, participants created a blue circle in front of the city’s famed Monumento de la Revolucion; a drone, hovering above, captured the moment on film.
Denmark
A few days later and a bit farther east, WDF staff met colleagues from Steno Diabetes Center for a 3k Global Diabetes Walk around Gentofte Lake in Copenhagen.
”The Walk campaign this year is the biggest ever,” said Anna Knauer Elley, the event’s organiser. ”That means that we are taking steps against diabetes together with more than 380.000 others - our Walk is just one of more than 1500 Walks in more than 58 different countries.”
She encouraged the Walkers to discuss diabetes, and its impact on their lives, along their route. The red balloons they carried drew the attention of passers-by, and many went home with school children encountered along the way.
Sudan
On 14 November, WDF Managing Director Anders Dejgaard and Programme Coordinator Mads Loftager Mundt were in Khartoum for the WDF’s first field visit to Sudan since 2008. While there, they participated in two Global Diabetes Walks: one held by the Jabir Abuelizz Diabetes Centre, the other by Sudan’s National Childhood Diabetes Centre (both part of WDF08-369). Between 50 and 100 people attended each Walk and attended follow-up activities afterwards.
The Minister of Health for Khartoum State spoke at both events, thanking WDF for its support since 2003 and emphasising the importance of partnerships that keep patients in focus. Anders Dejgaard praised the accomplishments of WDF’s Sudanese partners, saying that a foundation for diabetes care is now in place in the country.
Several young people with diabetes also spoke. Among them was a 17-year-old who thanked the WDF, saying the care and education she has received through WDF projects has taught her to value her life.
Argentina
The same day, WDF Programme Coordinator Jakob Sloth Yigen Madsen was in Corrientes for their Walk, which carried the ‘Taking steps to prevent diabetes’ slogan about 1.5 km, from the city’s Camba Cua Park to its General Manuel Belgrano Bridge.
At the end of their Walk, participants were greeted by employees of the Directorate General of Promotion and Health Protection, which provided water, diabetes information, and lively exercise sessions for those who were up for more.
WDF has two projects in Argentina, WDF14-937 and WDF 12-761.
UK
Also on Nov. 14, WDF was also part of MediaplanetUK’s 2015 Diabetes campaign. WDF contributed two articles – one exploring the challenge of diabetes in the developing world, and one introducing Pepito Tina, a Filipino beneficiary of a WDF-funded project.
The campaign, which is supported by the IDF, Patient.info and the American Diabetes Association, is expected to reach hundreds of thousands in the diabetes world and beyond.
See the 2015 Diabetes campaign