Tonga - the diabetes heavy weight of the Pacific

Tonga - the diabetes heavy weight of the Pacific

Brit Larsen
Dispersed over a vast area in the Pacific Ocean, the Pacific Islands - divided into Micronesia, Melanesia and Polynesia - are spread over 22 nations and home to nearly 10 million people. In recent years, the Pacific Islands have become known for a record in obesity and diabetes rates. While more than half of all Pacific Islanders are obese, one in every four lives with diabetes. 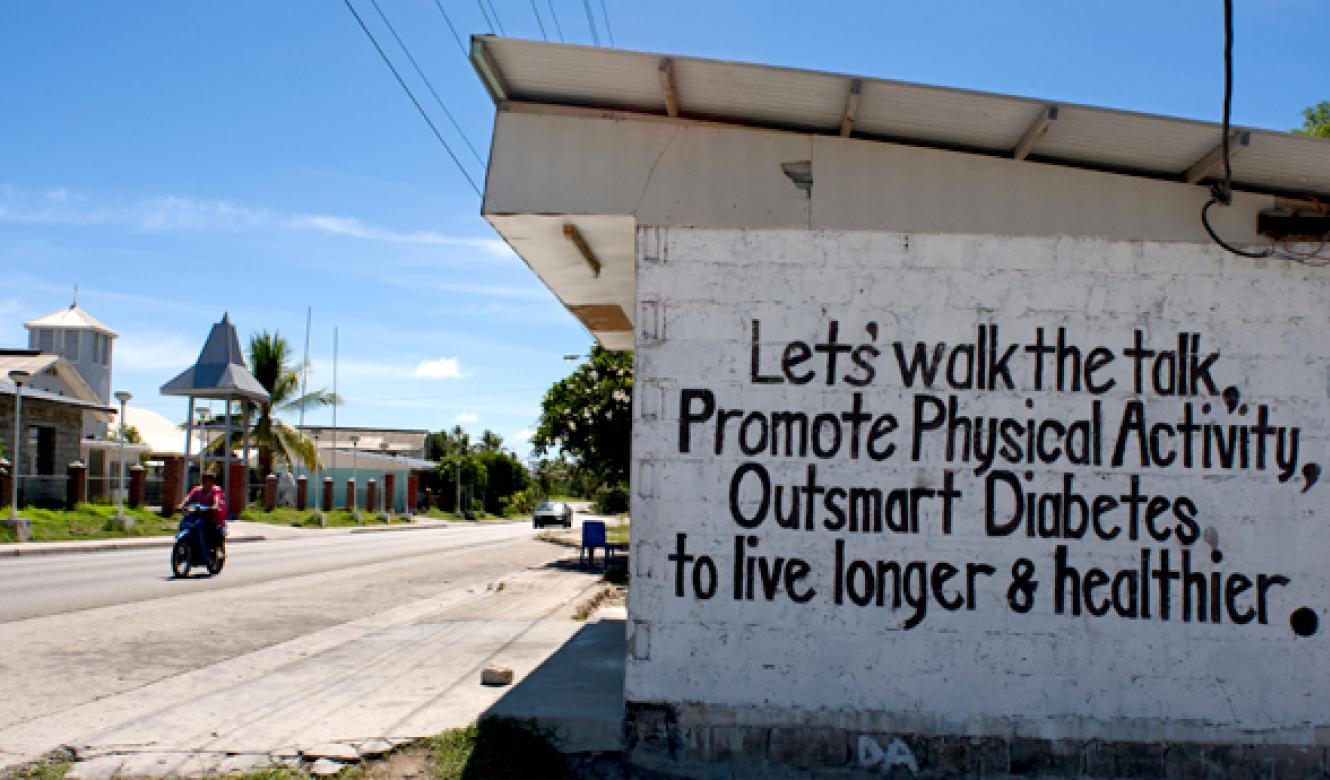 Pictured: The message to promote healthier lifestyle written on a wall in Tonga. (Photo: Tanja Jørgensen)

The reasons for this heavy toll of overweight are many, but among the most commonly mentioned are rapidly changing lifestyles combined with lack of food regulation and genetic predisposition. Initiatives to change behaviour and secure better food habits are on their way, but it may take years before we see an eventual impact. In the meantime actions in the health sector to try to treat those with diabetes and prevent complications are critically needed.

18% of Tongans live with diabetes
WDF currently supports projects in Fiji, Marshall Islands, Papua New Guinea, Solomon Islands and Tonga, and has previously also supported a project in Nauru and Vanuatu. In this article, we will take a closer look at the project in Tonga, a kingdom of 35 inhabited islands which are home to a population of 100,000 people.

Tonga is on the heavier end of the obesity statistics for the Pacific Islands with 69% of the adult population being obese. Data from 2004 indicate a total diabetes prevalence of 18% in Tonga(1). A survey in 2002 on the prevalence of diabetes in Tonga, found a doubling from 7,56 % in 1973 to 15,1% in 2002 of which 80% were undiagnosed (2).The authors concluded that "life-style-related NCDs will contribute the major source of burden of disease for the Tongan community unless interventions can be implemented to slow or reverse the trend."

WDF project contributes to reversing the trend
Since 2008 WDF has been supporting the Tongan National Diabetes Centre to reduce diabetes complications. The WDF supported project has three components: 1) a patient survey to identify the "Barriers to Access"; 2) an eye care component to screen for diabetic eye complications and 3) a foot care component to reduce the number of amputations.

Three years into the project the "Barriers to Access" survey has been completed and it has provided useful data for policy intervention and strategy. 200 people were interviewed for the survey about which barriers they experienced related to living with diabetes: personal, community, environment or in the service at the diabetes centre. The barrier which the majority of respondents marked was personal and indicated a lack of adherence to awareness campaigns and medical advice.

The eye component has also proven successful with 3,100 eye screenings leading to more than 200 laser therapies for patients at the main island as well as at the outer islands. In general, the procurement of the retinal camera and the training of staff under this project have more than doubled the capacity of the Tongan health system with regards to diabetic eye care.

The foot care component is in progress with the first training in basic foot care planned for September 2011 for 15 foot care teams. The need is critical with almost 4,000 annual visits to the National Diabetes Centre for foot dressings in 2008 (3). According to the Tongan Ministry of Health, amputations related to diabetes have increased three-fold in recent five years reaching 41 major amputations per year. At the main Vaiola Hospital in the capital Nuku'alofa amputation related to diabetes constitute the second most common reason for amputation (4).

Policies needed to make the healthy choice the easiest
While the three above components constitute a major improvement in access to health for people with diabetes in Tonga, they will not do the job alone. According to Ms Elisiva Naati, dietician and co-partner of the WDF project, "We need to develop policies and legislation that will ensure a supportive environment for healthy living. This could be ensuring availability and affordability of healthy foods, thus making the healthy choice the easiest and cheapest choice or an environment that supports physical activity or promoting an environment that is tobacco and alcohol free."

Health awareness programs are conducted and continuously carried out by the Ministry of Health and other non-governmental organisations involved in the promotion of healthy lifestyle. But Ms Naati points to a gap between awareness and implementation: "Approaches to prevent diabetes and its complications include education through radio, television and face to face education using materials such as pamphlets, posters, leaflets, etc. The challenge is that we can only educate and inform people; the choice to actually implement the change in their lifestyle is something that is totally up to the patient," she says.

Regional support to national NCD strategies
Policy work is indeed also being undertaken - both in Tonga and at regional level. Recently, the Tonga National Strategy to Prevent and Control Non-Communicable Diseases, 2010-2015 was launched with a particular priority to primary level capacity building. The Tonga National NCD Strategy has grown out of the regional 2-1-22 Pacific NCD Programme which among other things supports the development of national NCD plans within the participating countries and territories. The 2-1-22 Programme also operates at the political level to influence politicians on taxation modifications, health promotion initiatives and funding mechanisms to improve prevention and care.

WDF Programme Coordinator, Mr Lautrup-Nielsen was very positive about this regional initiative. "In light of the extremely high prevalence rates, scarce resources and comparatively small populations of the Pacific countries it is crucial that policy and intervention strategies for NCDs receive regional level support under the auspices of well established regional organisations which apart from helping build capacity can also help knowledge-sharing among the island nations", he said.

The 2-1-22 Programme was launched in 2008 and it refers to 2 organisations, 1 team to serve 22 countries. The programme is funded by the governments of Australia and New Zealand and managed jointly by the Secretariat of the Pacific Community (SPC) and regional WHO (WPRO). Every year a Pacific NCD Forum is held with large numbers of internal and external participants - this year in August Tonga will host the Forum. 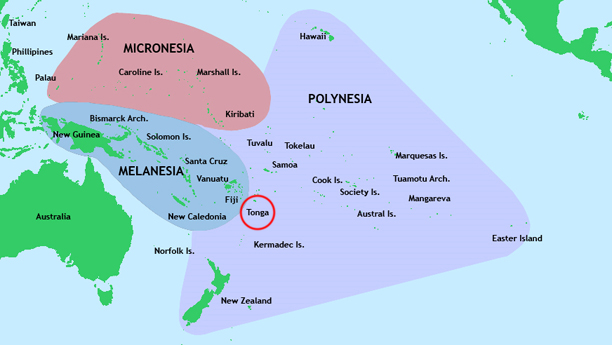 Pictured: The Kingdom of Tonga, part of the Pacific region of Polysenia.