WDF’s Myanmar project is off to a strong start, with three new clinics now operating at key university hospitals. 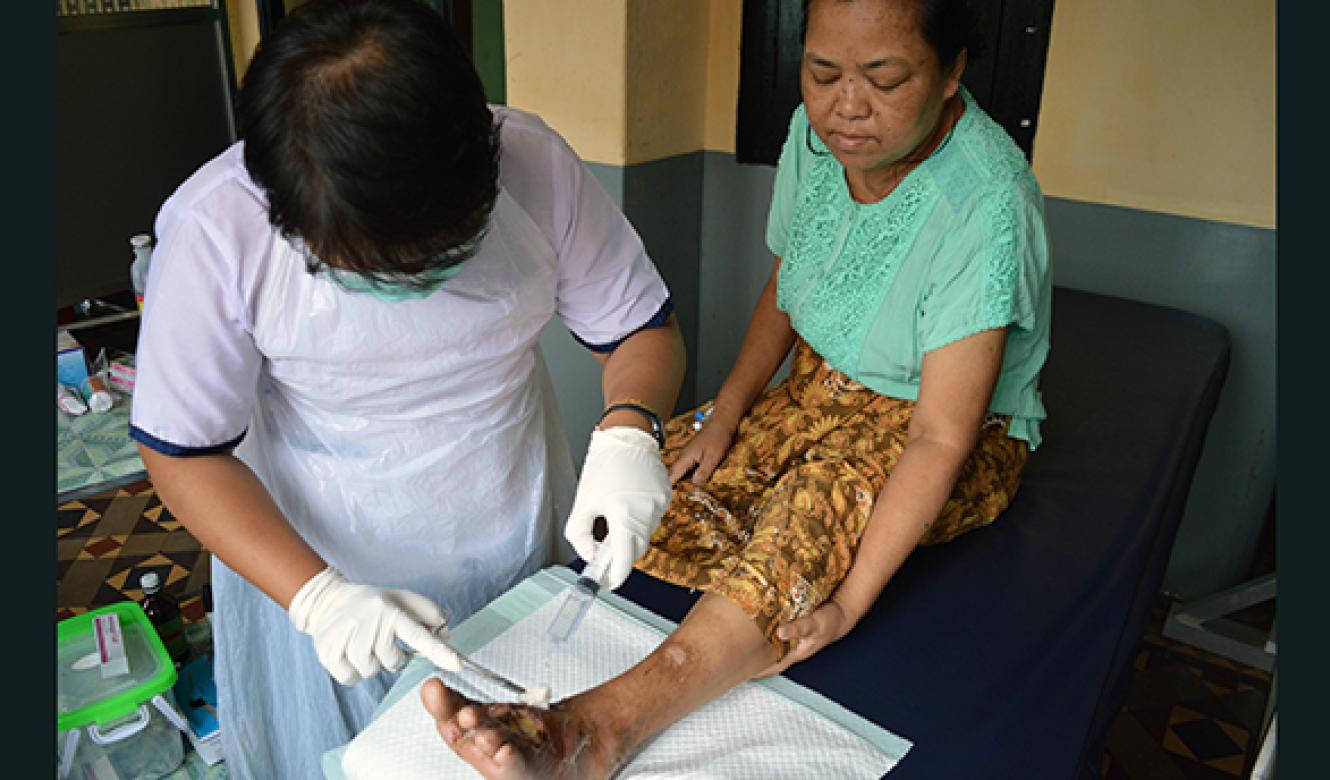 Ms Daw Aye Aye Than receiving foot care at the new diabetes foot clinic at hospital UM1 in Yangon.
On a warm November day in Yangon, a neatly dressed 49-year-old woman sat stoically behind a wood and glass partition at University Hospital UM1, her legs outstretched in front of her. A nurse swabbed her left foot gently, cleaning the space around her recently amputated second toe. The woman cringed, but made no sound.
“She has pain,” acknowledged Moe Wint Aung, Professor in endocrinology in the Department of Endocrine. “We would like to give her some analgesic spray, but we have a shortage of this good material for pain.”
Yet Professor Aung, her hospital colleagues and the patient, whose name is Ms Daw Aye Aye Than, agreed – Ms Daw Aye Aye Than had been lucky. She was referred to UM1’s diabetes clinic for insulin treatment, where a foot ulcer with gangrene was discovered. In the past, the diabetes clinic staff would have dealt with the ulcer as best they could. But thanks to WDF’s Myanmar fundraiser project, Ms Daw Aye Aye Than was able to visit a new diabetes foot clinic in the hospital, and receive immediate, effective care.
Prof Aung asked the patient a few questions, then turned to her visitors.
“Because she lives far away, she’s staying at the hospital for one or two months,” she said. “With luck, after that she can go back to work.”
Little focus on feet
Diabetes is one of the main health problems in Myanmar, according to the Myanmar Diabetes Association. A national STEPs survey supported by the WDF in 2014 found a diabetes prevalence of 10.5% among Myanmar adults, well above the global diabetes prevalence of 7.3%.
Funds raised by the WDF 2016 are being used for diabetes foot care training, screening and awareness in three university hospitals in Yangon and Mandalay, Myanmar's two largest cities.
“We started talking to WDF about diabetes care in Myanmar because there was no systematic diabetes foot care system in Myanmar,” explained Prof. Ko Ko, General Secretary of Myanmar Society of Endocrinology & Metabolism and Endocrinologist at UM2, WDF’s partner on the project.
People with diabetes receive basic care at the local level, but there has traditionally been little focus on feet, he says. “Because of that, we’ve had a lot of amputations due to diabetes - amputations that can be prevented.”
When Myanmar’s government established three new diabetes clinics in the country’s university hospitals in 2015, Prof Ko Ko saw an opportunity. “Our objective is to establish these three clinics, and then train doctors and nurses across the whole country,” he said. “Our initial aim is to train 450 HCP within 3 years. We’re also planning screening and public awareness about diabetes foot care.”
WDF Programme Manager Hanne Strandgaard was among those who visited UM1 that November day.
“All three clinics are going 100km per hour – systematic, routine diabetes foot care services are being provided,” she said. “A patient registry is in place, which will enable more comprehensive data on foot complications to be collected and disseminated. Informative and visible educational materials have been developed, and other hospitals are looking to copy this approach. This will be a success – we can be very proud of this project and our project partners.”
The tip of the iceberg
Challenges remain: Prof Aung would like more training for her staff, and is working to obtain more medical supplies for the new clinic. Awareness about the dangers of diabetic foot ulcers are still low, Myanmar lacks podiatrists, and there’s a lack of shoemakers producing appropriate footwear for people with diabetes and foot complications, Prof Ko Ko adds.
Still, he and his staff are optimistic – and ambitious.
“We’ll continue to educate HCPs, and teach patients to know their risks," he says. "We hope to reach people living in villages, provide screening in villages, and teach midwives to do screening. This is tip of the iceberg.” 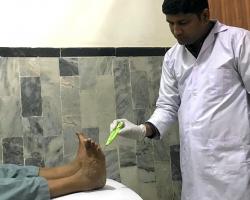 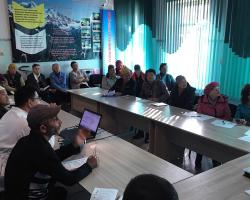 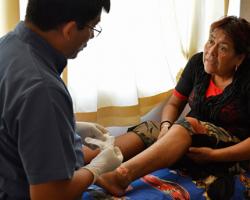