Diabetes campaign gives hope to inmates in the Philippines

Diabetes campaign gives hope to inmates in the Philippines

Brit Larsen
Winning the 2012 Global Diabetes Walk award became the symbol of a Walk to freedom for inmates in a Philippine prison. From feeling neglected and isolated from society the campaign made them feel empowered and united. 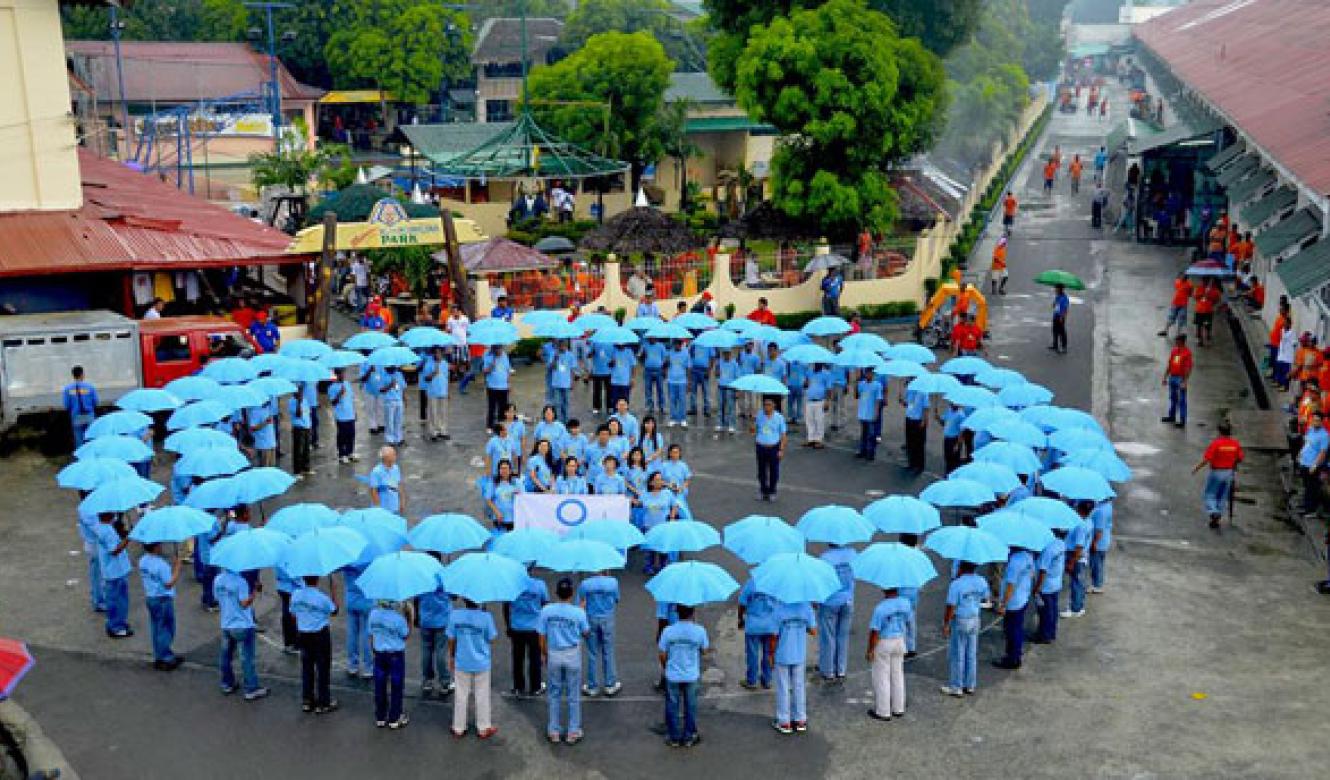 Inmates creating a human circle to unite against diabetes in Muntinlupa, Philippines

When staff nurse Ms Hasmin Sescar received the phone call that the Bucor Inmates Diabetes Association (BIDA) had won the 2012 Global Diabetes Walk award for best awareness and advocacy campaign she was speechless for a while: “My heart started pounding. I could imagine the faces of the inmates, their happiness and pride. At last, I felt that we had broken the prison walls; they could not hinder our inmates from being free, from expressing their commitment and support to fight against the dreaded complications of diabetes,” she says.

Nurses with a vision
The prison in Muntilupa City in the Philippines where BIDA is located has 13,000 inmates and 13 gangs. Each gang has different principles, cultures and rules apart from the prison rules, which causes many fights and conflicts.

Under normal circumstances, it would be unreal to imagine that inmates from rivalling gangs would collaborate for a whole day. Yet, the nurses from the Diabetes Care team had a vision: to make the gangs collaborate during the World Diabetes Day (WDD) activities.

At war against the same enemy: diabetes
The first year, it was very challenging to convince the inmates to participate, so only a few of them joined. The following year, the nurses decided to register for the Global Diabetes Walk campaign.

“The diabetes care team told our inmates patients that even though they belong to a certain gang, when it comes to diabetes management, only one gang exists: The Bucor Inmates Diabetes Association (BIDA) headed by Diabetes Care Team,” says Hasmin Sescar a staff nurse in the Bureau of Corrections. She adds “This is how the 14th gang was created. A gang which always stresses that we are at war against only one enemy, namely diabetes and not against each other,” she says.

2013 Walks full of traditions
The 2013 WDD activities had spiritual elements including the formation of a human cross and a human circle. The first Walk took place inside the prison walls and was joined by the President of the Rotary Club of Alabang, the President of the Philippine Association of the Diabetes Educators (PADE) and the Secretary of the Association of Diabetes Nurse Educators of the Philippines (ADNEP).

The second Walk was based on the Filipino pageant parade tradition called “Santacruzan”. Relatives of each gang were chosen to participate in the parade and afterwards, they quizzed about what to do to delay the onset of diabetes among family members.

Connecting with the outside world
According to the inmates, the WDD activities have not only raised their awareness about diabetes; it has given them a reason to continue living a quality and meaningful life. “This awareness work done in the prison has demonstrated to the inmates that there are people out there who care about them. It gives them hope of having a chance to start over when they come out of prison,” says Hasmin Sescar.

When asked about what motivates them to do awareness activities Hasmin Sescar says, “We are working inside the prison and our inmates are our primary concern. We have seen their excitement in preparing and implementing everything that was planned for the celebration. The feeling of being part of a campaign joined by organisations worldwide makes them identify with the world outside the prison walls and it makes them feel free even for a short period. We have witnessed their behavioural change. The lay education training program, diabetes management, the management of BIDA and activities such as the WDD celebration are huge factors in our inmates’ transformation.”

As opposed to what one might expect, the prevalence of diabetes in the prison is 6% compared to the country average of 9%. This could be due to the consistent awareness work done by the nurses since 2006.

Award will have an impact
Among the organisations involved in this year’s event are PADE, ADNEP, ISDFI, CDGC, Rotary Club Alabang. They have been supporting the Diabetes Care Team and BIDA in several ways. The Institute for Studies of Diabetes Foundation Incorporated has provided post graduate training to become diabetes educators and the Consortium of Diabetes Clinics has donated the insulin to treat the inmates.