We are very glad to get this project – Bimal Mandal

We are very glad to get this project – Bimal Mandal
Type 2 diabetes
Bimal Mandal is a honey hunter living in the West Bengal village of Samsernagar. 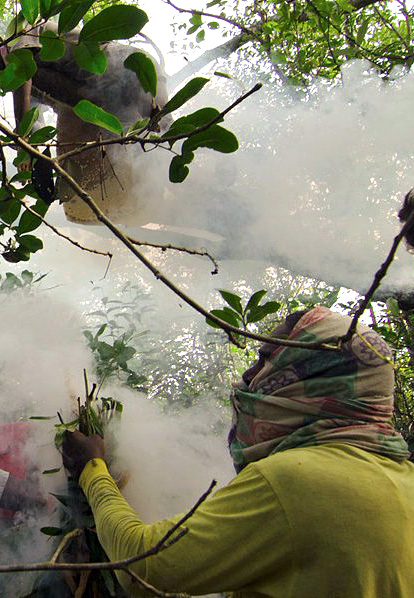 It’s an exceptionally difficult and dangerous livelihood: to collect honey in his native Sundarban area, he must navigate forests populated by Bengal tigers and poisonous snakes. But he persists - six family members depend on him for survival.

There are few healthcare services in the Sundarbans, a hard-to-reach area with more rivers than roads. So when Mr Mandal heard that the Jujersa Women and Child Welfare Organization was holding a diabetes awareness camp near his home, he decided to attend.

An initial screening revealed a BMI above 26, placing him at high risk for diabetes, and a blood sugar test returned a worrisome 396 mg/dl. At that point, camp staff told Mr Mandal about a small boat, staffed with a doctor and two community health workers, that would be visiting the area. They urged him to be there when it arrived.

He agreed – and when the boat arrived soon after, its staff checked Mr Mandal’s fasting and post-prandial blood sugar levels. They confirmed he had type 2 diabetes.

Yet follow-up health checks revealed that even with medication, Mr Mandal’s fasting blood sugar level remained above 200 mg/dl, and that he had developed cardiovascular problems. He was then referred to Barasat District Hospital, 89 kilometres from his home.

In the hospital, he received treatment for diabetes as well as for cardiovascular problems. He then returned home to his family, where he received follow up care by follow up workers of Jujersa Women and Child Welfare Organisation.

He told project staff, “Amra Khub Khushi ai Project peye. Amra WDF-er kache kritagya.” (We are very glad to get this project. We are grateful to WDF).

His health much improved, Mr Mandal is now able to return to the forest, and the wild honey that he and his family depend upon.

Mr Mandal’s diagnosis, care and follow-up were made possible by Reaching the Unreached through Diabetes Prevention and Care Programme, WDF15-1241.