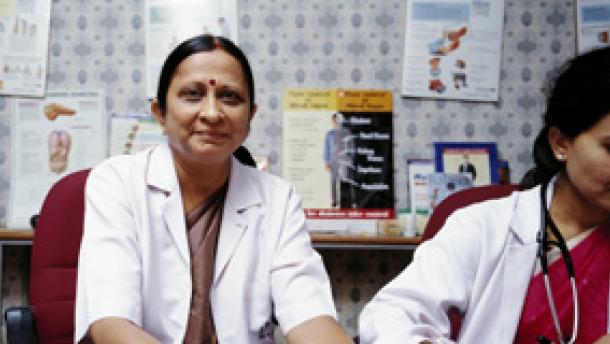 In India, 61.3 million people live with diabetes, and 50 million more are at risk (IDF, 2011). Recent data indicates that between 9 to 17 % pregnant Indian women have gestational diabetes (Seshiah V et al 2009).

Uttar Pradesh is the most populous state in India (215 million people) and also the state with one of the highest maternal and infant mortality rates. Amongst many other causes, undiagnosed and untreated GDM is speculated to play a role largely due to the lack of knowledge about and its consequences among health care professionals.

Screening for GDM is particularly crucial in this region because Indian and Asian women are considered to be at the highest risk of developing glucose intolerance and GDM compared to other ethnic groups.

Objectives
The goal of this project is to improve detection and management of gestational diabetes by building capacity in the public health system, whereby the area of NCD prevention anc area shall become closer integrated with maternal care/RCH.

Approach
This project will be implemented by Jain Hospital, in collaboration with the Ministry of Health & Family Welfare of the government of Uttar Pradesh, India, and under the framework of a MoU between Jain Hospital and the National Rural Health Mission of Uttar Pradesh State (NRHM), a federal level programme implemented in all states of India.

The pilot project in Kanpur district provided screenning to all pregnant women in the 24-28 weeks of pregnancy, and provided follow-up counselling to those diagnosed with GDM.

450 community camps were organised where pregnant women also could acquire follow-up. The strategic locations of the community camps focused on the population below the poverty line.

A free GDM telephone hotline was established to give guidance to pregnant women 12 hours a day, every day Monday to Sunday.

The trainings were based on IDF’s Diabetes Education Module 2011. The training of trainers (ToT) model was used to disseminate knowledge, reaching a total of 4,000 healthcare professionals in the provinces targeted. New educational materials were developed for GDM education in the local language.

Through the second phase of WDF support to Uttar Pradesh state NCD response the structures established during phase 1 shall be further refined and expanded in order to become a statewide model. Further alignment with new (2015) FIGO recommendations towards hyperglycemia in pregnancy will be pursued and large scale awareness and education campaigns will be implemented while stakeholder mobilisation will take place at different administrative levels across Uttar Pradesh.

The institutional structure will continue with Jain Hospital as co-implementing agency under the framework of the Uttar Pradesh State government and the NRHM.

More than 1,000 health care facilities at referral, secondary and primary will be included and hence provided necessary material and equipment meanwhile more than 3,000 health care professionals and 6,000 community health workers of various categories will be trained.

Estimated 300,000 pregnant women will be screened for hyperglycemia in pregnancy/diabetes and provided education and counselling with an expected more than 40,000 women to be diagnosed and provided care