Prevention and control of diabetes WDF11-647

WDF11-647
The aim of this project is to promote awareness and improve diabetes care – focusing in particular on GDM – in four districts of Uttar Pradesh, India. 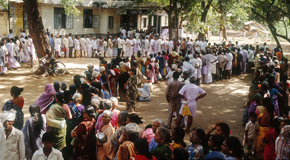 With more than 61 million people living with diabetes the burden of diabetes has reached epidemic proportions in India. Despite this high number, diabetes awareness is still extremely low, especially in rural areas, where access to care is also limited.

Uttar Pradesh is the most populous state in India, and while the burden of diabetes may be less pronounced, it is assumed high. The four districts targeted by this project are all characterised by their high levels of poverty, inadequate awareness and limited access to care and information. In rural areas like these, it is estimated that for each known person with diabetes, two people remain undiagnosed. Consequently, people do not seek medical care until severe complications occur; often when it is too late.

Objective
The aim of this project is to promote awareness and improve diabetes care – focusing in particular on GDM – in four districts of Uttar Pradesh, India; Lalitpur, Maharajganj, Sitapur and Shahjahanpur.

Approach
This project is initiated by the Catholic Health Association of India (CHAI), which is a membership-based NGO with more than 3,300 member institutions throughout India.

The first component involves implementation of diabetes care services at existing health institutions in the districts. CHAI will deliver capacity building to eight CHAI member health institutions, providing both primary and secondary health services. Besides providing screening equipment, CHAI will train health care staff in basic diabetes and GDM care. Five health care staff (doctors, nurses and paramedics) from each CHAI facility will be trained as trainers. They are supposed to act as trainers for village volunteers, government frontline service providers and other government stakeholders.

The third component comprises community level screening camps and special programmes focusing on pregnant women and their spouses, to be conducted every second month in each district. People identified with diabetes or GDM during these health camps, will be referred to the closest CHAI membership institution.