Stephen Gough, Member of the Board 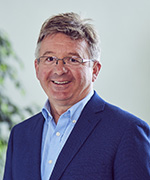 Dr Stephen Gough, MD, FRCP, joined Novo Nordisk A/S in Copenhagen in 2015, to provide medical guidance on the development of new molecules and drugs for the treatment of diabetes and obesity. In 2018, he became Senior Vice President and Global Chief Medical Officer.

Prior to joining Novo Nordisk, Dr Gough worked in the UK as a clinical academic with an interest in diabetes, endocrinology and metabolism. He spent 15 years as a specialist in the West Midlands, becoming Professor of Medicine at the University of Birmingham, and University Hospitals Birmingham. In 2010 he became Professor of Diabetes in Oxford and Head of the Oxford Centre for Diabetes Endocrinology and Metabolism (OCDEM). Dr Gough served as Professor of Diabetes to the University of Oxford and Consultant Physician at the Oxford University of Hospitals NHS Trust. His clinical interests focused on diabetic foot disease and both pancreas whole organ and islet cell transplantation.  Dr Gough was Diabetes Clinical Lead for the Local Clinical Research Network and the Academic Health Science Network in Oxford.

Dr Gough received his medical training from Leeds University Medical School and holds post-graduate diplomas from the University of Leeds and the Royal College of Physicians, UK.

Dr Gough is a UK national, based in Copenhagen.