Kaushik Ramaiya, Member of the Board 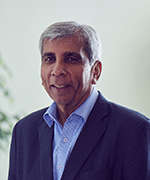 Dr Kaushik Ramaiya is Consultant Physician and Assistant Medical Administrator at Shree Hindu Mandal Hospital, Dar es Salaam, Tanzania. Dr Ramaiya holds several other honorary appointments such as Vice President of the International Diabetes Federation, Hon. General Secretary of Tanzania Diabetes Association and member of the Board of the National Health Insurance Fund, Ministry of Health, Govt. of United Republic of Tanzania, and a member of the Medical Council of Tanganyika. He has produced numerous publications on diabetes research and has implemented many initiatives and studies to put diabetes on the health agenda in Africa.

Dr Ramaiya has been the mainspring of and project responsible for several WDF-funded projects in Tanzania.

Dr Ramaiya is a Tanzanian national, based in Dar es Salaam.