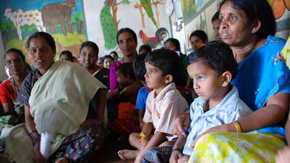 In addition to the 32 million people living with diabetes in India, recent data indicate that about 16% of pregnant Indian women have gestational diabetes.

Despite medical and scientific advancement many remain in the dark about basic knowledge on diabetes and its prevention and control measures - not least information and awareness on gestational diabetes mellitus.

This is true not only for the lay public but also among health care professionals. The problem of gestational diabetes and its potential influence on the development of diabetes in the mother and child at a later stage has been largely un-addressed.

Objective
The project seeks to create awareness among the public - in particular women's groups - on gestational diabetes mellitus (GDM) and to build capacity in the health care system to prevent, manage and control the problem.

Approach
The first three years of intervention are considered a pilot phase of the project. In this phase, the project will focus on one urban and one rural setting. These will be the city of Chennai and Kanchipuram district in the state of Tamil Nadu.

The surveillance aspect of the project covers 1000 pregnant women in Chennai city and 1500 in Kanchipuram district attending primary health centres and child welfare centres spread over the selected areas. These women will form the primary target group to be followed for a period of three years.

Capacity building will take place at different levels. Medical professionals in the project area will be trained for monitoring and guiding the field staff to run the project activities.

Last but not least, local NGO's women self help groups are trained for their effective participation to educate their families, other women and the communities at large.

The awareness component of the project will focus on first identifying message contents for dissemination among the target groups. Production and distribution of posters, handbills, pamphlets and stickers will take place and mass media will be used to disseminate the messages.

Specialist agencies will be used for the mass media aspect, whereas local NGOs play a key role in raising the awareness in the communities.