Gwendolyn Carleton
A WDF-supported diabetes Centre of Excellence is improving care and reducing hospital admissions in Machakos, Kenya. Staff are eager to share what they have learned. 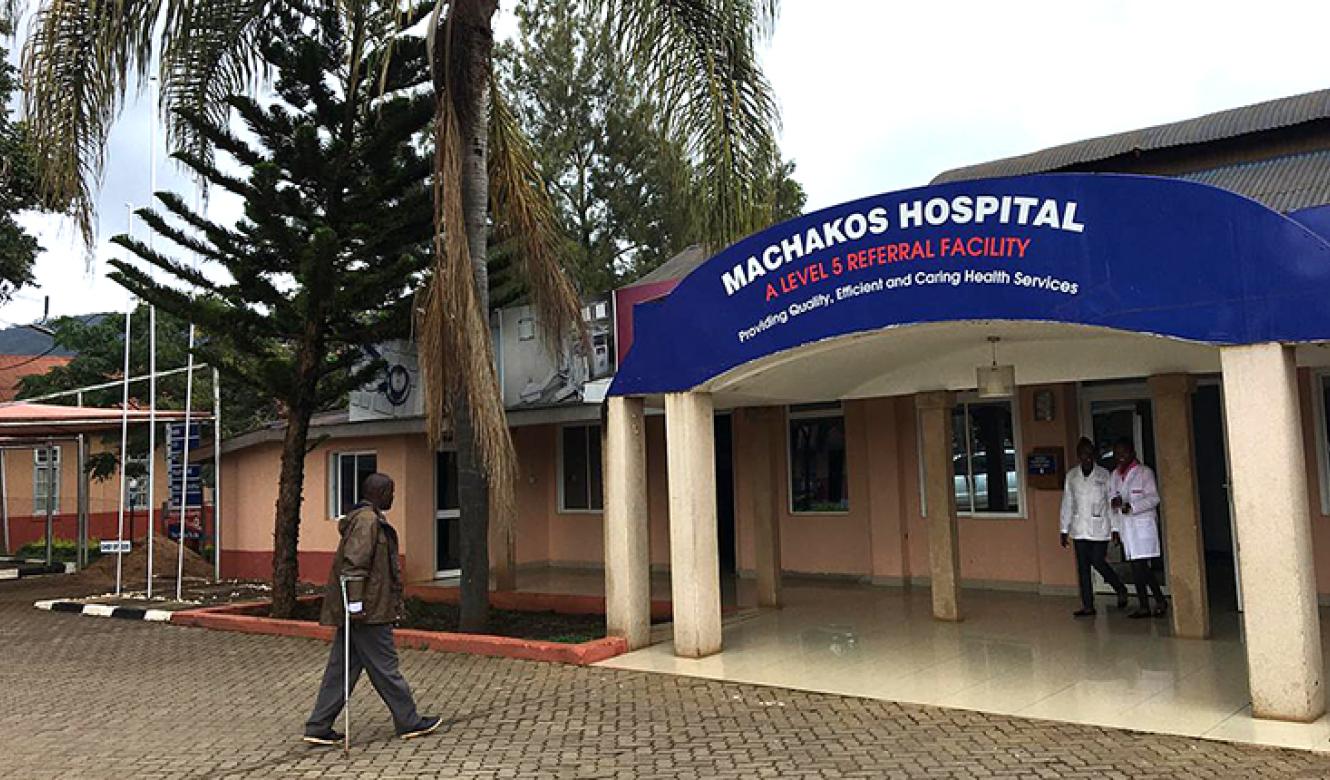 The Center of Excellence has created a single point of care for people with diabetes, including consulting, eye and foot exams, a nutritionist and a pharmacy.

Christine Mwelu James sat at the intake centre of the Machakos Diabetes Clinic, a cosy woollen jacket and patterned kanga insulating her against the damp winter day.

The medical staff clustered around her, however, were all focused on her bare right foot. They lifted and turned it to reveal a thumbnail sized ulcer, red and painful looking, surrounded by a circle of discoloured flesh.

“She came from a primary care clinic close to her home,” explained Nurse Philip Mumo Mutisya. “When they see a small wound they send patients home, then refer them to us when the problem gets worse. It’s good she’s here." 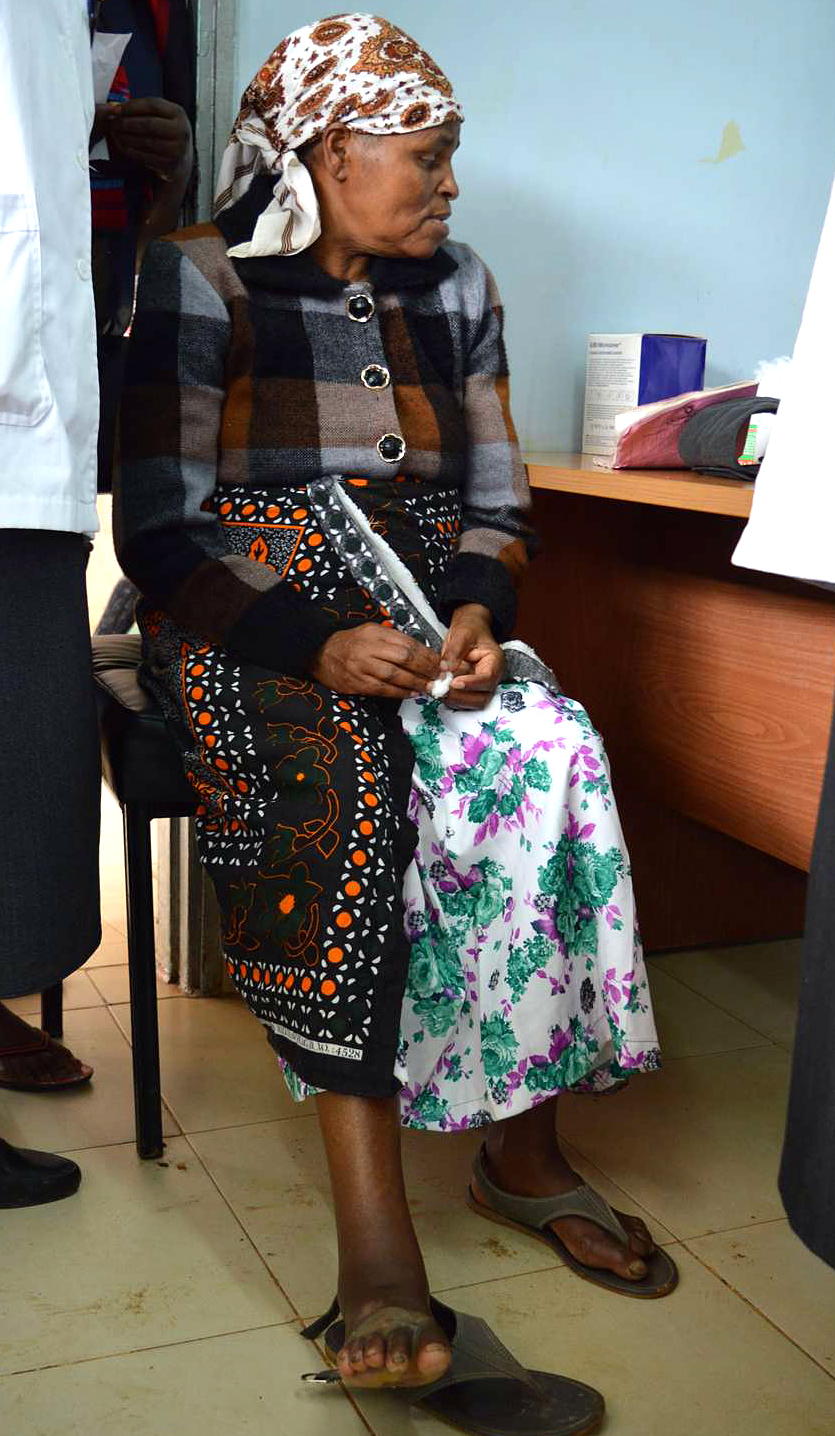 ‘Here’ was the Machakos Hospital Diabetes Centre of Excellence (CoE). The CoE opened in 2016 to help meet Kenya’s growing demand for diabetes care: Machakos, a county with 1.4 million residents, was selected for reasons including the hospital staff’s skill and its proximity to Nairobi. A WDF fundraiser supported new rooms for the CoE, and equipment and training for its staff.

The CoE began with 144 patients; today, more than 3,000 people travel here from across the county. About 5% of the CoE’s patients have type 1 diabetes; they receive free supplies through the Changing Diabetes® in Children programme. Patients with type 2 diabetes receive care and supplies via Kenya’s new universal healthcare programme (Machakos was selected as a universal healthcre pilot region in 2019).

The CoE has created a single point of care for people with diabetes, including consulting, eye and foot exams, a nutritionist and a pharmacy. This saves them time, reduces confusion and improves compliance, said Dr Charles Nzioki, the clinic’s paediatric endocrinologist.

“It’s all here – the clinicians, the supplies, the labs, the medicines,” he said. “By bringing services together, we end the possibility of patients getting lost.”

This comprehensive approach has also led to improvements in staff training, collaboration, and ultimately quality of care, he said.

“The percentage of patients with complications who are being admitted is falling,” he said. “This centre has been a big, big part of improved diabetes care in Machakos.”

More to be done

While staff and management spoke proudly of the CoE’s achievements, they were also quick to note that there’s more to be done.

Electronic medical records are not yet rolled out in Machakos; in the interim, CoE staff have expanded their paper forms and improved their filing systems.

A larger problem is the lack of diabetes capacity in primary and secondary level clinics – both in Machakos, and across Kenya. This can lead to many problems, he said.

“Sometimes people are prescribed drugs, and when they use them up and don’t come back to the clinic, because no one told them diabetes is a chronic disease,” he said. Other patients do return to the clinic, but don’t receive the follow-up care they need.

“If they return and just receive a refill, that’s not good enough. They should be checked – their feet, eyes, kidneys, everything. Unfortunately, that rarely happens,” he said. “Sometimes, when the patient is referred to Level 5, it’s too late. I would love to transfer the excellence from this centre to Level 4 and 3.”

‘It will be good’

The centre’s staff and partners emphatically agree. During a roundtable discussion, the need to share learnings with colleagues at the primary and secondary levels was a popular topic.

“I would advise others to create a single point of care where ever possible – the patients are quite happy with it,” said Christine Muthaka, a clinical counsellor at the centre.

“One in every village has diabetes,” she said. "The numbers are so large and growing. We can not meet all the growing demand here – we need to address lifestyle, diet, and better use the resources at our disposal, including patients who understand the condition.” 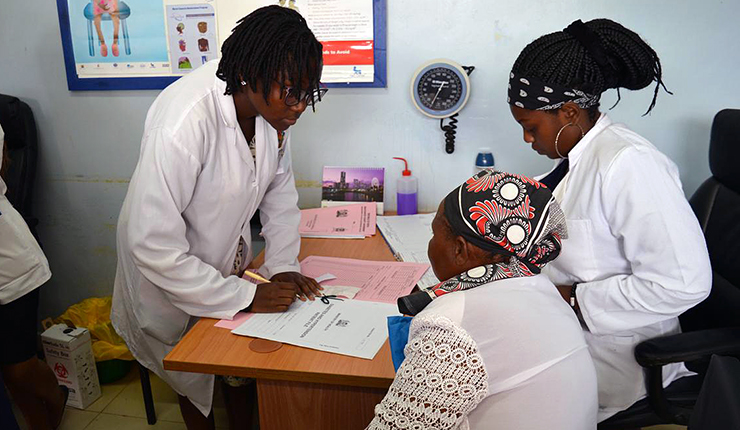 Staff consult with a patient at the Machakos Hospital Diabetes CoE.

Ms James, the patient with the foot wound, is an example of what’s at stake. Her local clinic diagnosed her diabetes and referred her to Machakos when her wound worsened – which was positive, according to Mr Mutisya, the clinic nurse.

But many are not yet able to prevent small wounds from becoming ulcers – or to teach patients like Ms James how to avoid diabetes complications in the future.

“We don’t do a lot of outreach to the lower levels – yet,” he said.“But we would like to empower them, to go and give education to them. It will be good.”

Ms James was admitted to Machakos Hospital in late January, 2020, and released 9 days later after successful treatment of her foot ulcer. 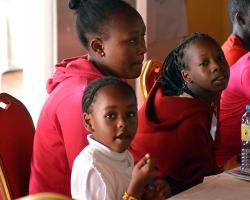