‘Is that Omondi, who used to be sick?’

‘Is that Omondi, who used to be sick?’

Gwendolyn Carleton
WDF staff meet people with diabetes worldwide, and each has a story. Here, we introduce Eric Omondi, a young Kenyan with type 1 diabetes. 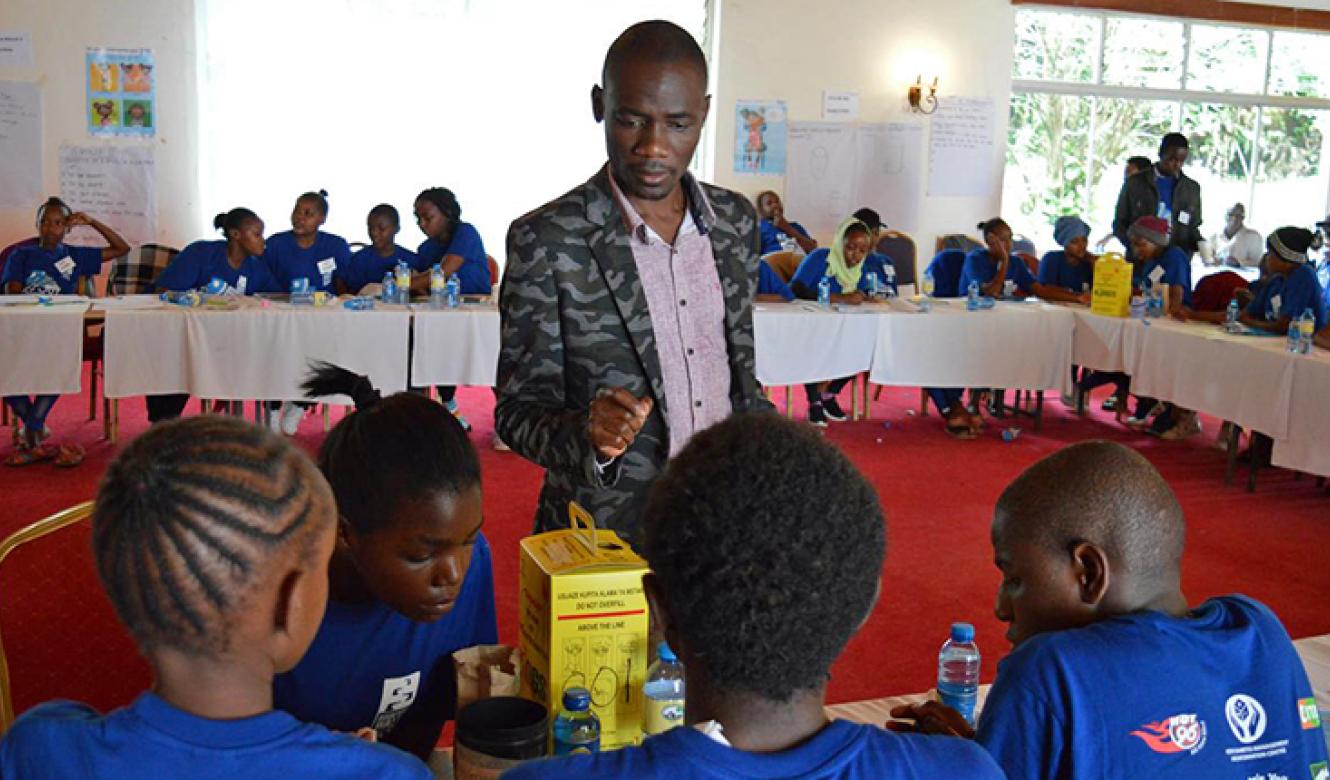 Eric Omondi during a camp for young people with type 1 diabetes in January 2020.

As a kid, Eric had a reputation as ‘the bright one’ in Sirembe, a village in Southwestern Kenya. He was the third-born of seven siblings: curious, earnest and good in school.

But in sixth grade he started feeling ill. The symptoms resembled malaria, so his mother bought antimalarial drugs in the village market. The symptoms continued, but going to the hospital just wasn’t an option – it was far away, and getting there and paying for treatment was too expensive.

By eigth grade graduation, Eric’s symptoms were serious: extreme fatigue, thirst and weight loss. Yet somehow he continued to excel in school, setting in motion the biggest decision, and challenge, of his life.

“Due to poverty, my parents had no plans for me to proceed to high school,” Eric explains. “My elder brother and sister did not go past primary. But when we received our class 8 final exams, I had an A. When the high school calling letter came, I had secured a chance in a national school.”

With his family’s support, Eric decided to go. He would begin an exciting new phase of his life in the far-away metropolis of Nairobi. He felt the expectations acutely: his own, and those of his family and community. It was a lot of stress to place on a body that had been living with uncontrolled diabetes for years.

Early in 2003, Eric said goodbye to his family and friends and enrolled in boarding school, where new academic challenges came along with new rules, traditions and social norms. His symptoms rapidly worsened.

Fortunately, the schol had a dispensary, where Eric met a school nurse who suggested he may have diabetes. Unfortunately, the nurse quickly dismissed the idea.

“The school did not have a glucometer and I could not be checked,” Eric says.

By September 2003 in his first year in high school, Eric reached a breaking point. “I could no longer hold on, and was taken to hospital,” he says.

Eric was diagnosed with type 1 diabetes at the hospital, and sent back to school in October with a single vial of insulin. He still remembers the date that that first, precious vial ran dry.

“I finished it on 1 December, 2003,” he says. After that, he returned to the village for school holidays, then returned to school the following January – all without further medical care or insulin.

Eric went without a clinic visit or insulin until October 2004, by which time he was so sick he had to drop out of school.

“I was an ambitious student, and some people mocked me when I failed,” he recalls. “Diabetes took away a big opportunity for me.”

As one door closed, though, another cracked open. A teacher at Eric’s school told an acquaintance at The Kenya Diabetes Management and Information Centre about Eric and arranged an introduction.

“Fortunately, I was still in Nairobi,” Eric says now. “I enrolled at DMI as a beneficiary, and began receiving care and insulin. The DMI team went to the school and talked to the administration. I went back, and finished high school in 2006.”

Degree in hand, Eric sought ways to help others with diabetes in Kenya. He volunteered to help with prepartions for the annual Diabetes Walk in 2007, and received training as a diabetes peer educator. In 2011, DMI and other well-wishers helped Eric earn a diploma in nursing. Today, he works at DMI as a nurse, educator, ambassador and programme officer for the Changing Diabetes in Children® programme.

“I’ve become a real ambassador – people call me with questions, and look for me at meetings,” he says, smiling. “I’m proud I’m able to contribute.”

Omondi, who used to be sick

The depth of this contribution was on display during a camp for people with type 1 and their families. When Eric spoke about diabetes – the medical aspects of the disease, and how to treat it - participants listened carefully.
Yet in some ways, his personal example was even more important. Eric is a well-educated young man with a good job, a lovely wife and two young children. As one parent at the camp explained: “After diagnosis, my son thought he wouldn’t live 10 years – now, he sees people with the condition who are graduates, who have families. This is very important.”

There’s a story Eric likes to tell. It generates a special kind of laughter from Kenyans familiar with village life, and from kids who have felt the sting of diabetes stigma first hand.

“Two years after my diagnosis, when I had been on medications for 10 months, I returned home. And as I was walking, I heard one neighbor saying to another Is that Omondi, who used to be sick?
“They were shocked, completely shocked – Are you cured? they said.”

It still makes Eric laugh. “Now they call me fat,” he says.

To meet more people touched by WDF projects, see the Patient Stories section of our website.